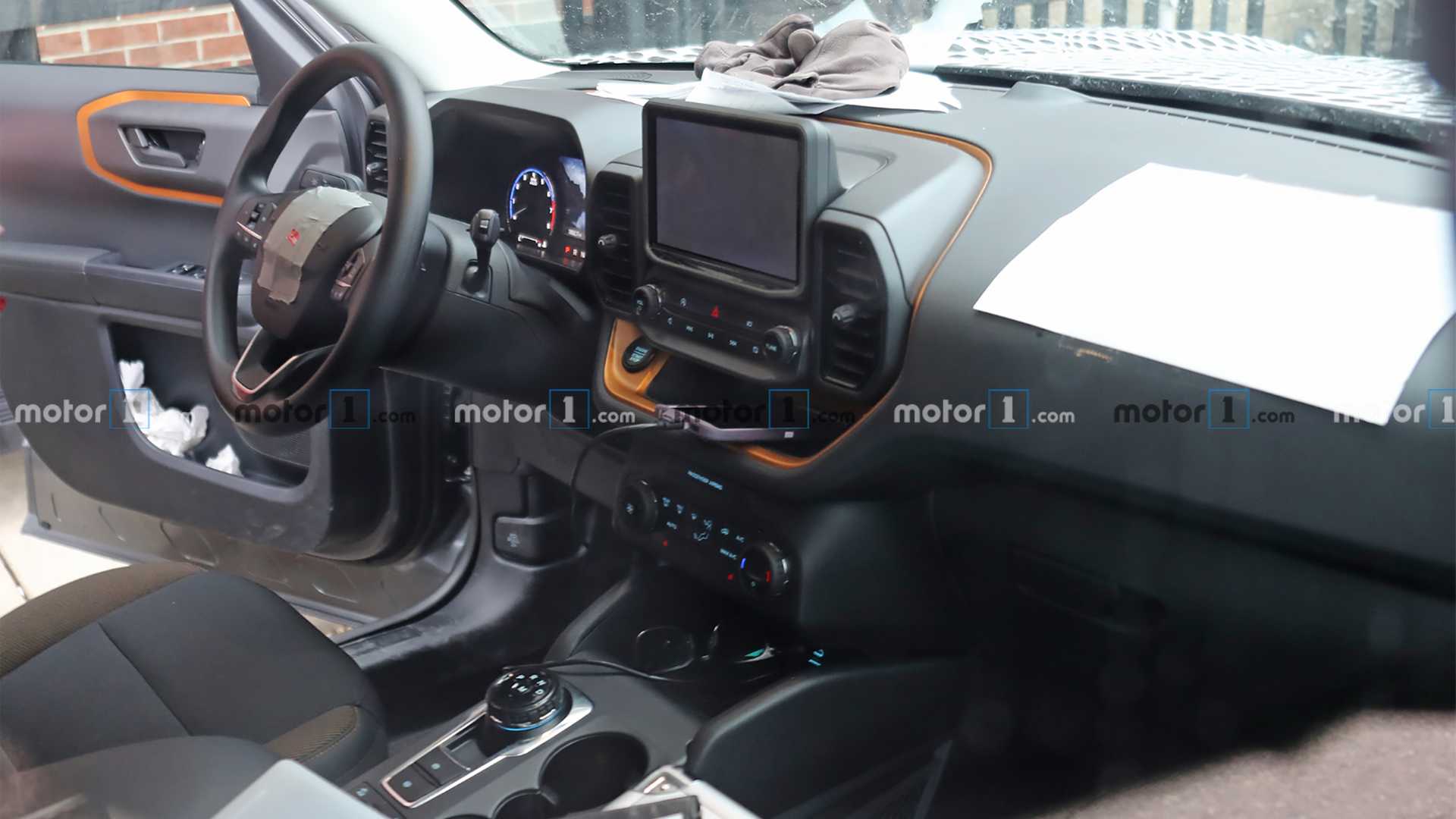 It’s our best look yet at the cockpit of the Jeep Renegade competitor.

The interior of the 2021 Ford Bronco Sport has been spied fully uncovered, betraying a design that’s wholly different from the Escape that shares its platform.

The 2021 Ford Bronco Sport is on its way to give Ford an off-road–oriented crossover like the Jeep Renegade Trailhawk, and today its interior was spied completely uncovered. The Bronco Sport is based on the same platform as the current Escape, but thankfully, it features wholly different interior and exterior styling from Ford’s inoffensive-but-bland small crossover.

Taking a page from its square-jawed bodywork, the Bronco Sport’s interior is suitably beefed up relative to the carlike Escape. The fully digital gauge cluster – which is likely an option – hides inside a hooded binnacle not unlike that of the F-150 pickup. Likewise the center dashboard air vents that bookend a horizontal floating touchscreen, under which is a slot for storing phones, wallets, and the like. Climate controls raided from the Ford parts bin are mounted down low in the center stack, which we fear might not be ideal for ergonomics.

Scattered throughout the Bronco Sport’s front cabin are color-keyed trim pieces that liven up the environment. This model in particular, which appears to be a middle trim level, features orange accents around the door handles and infotainment display. Our photos also show an outdoor-chic black and brown colorway for the durable-looking cloth seat upholstery. Unfortunately, we think we see some nasty hard plastics in the interior, including the infotainment and gauge surrounds and the center stack’s knee bolsters. Ouch.

Push-button start and a rotary transmission selector provide control over the powertrain (likely a 1.5-liter inline-three or 2.0-liter inline-four, both mated to an eight-speed automatic gearbox). Just barely visible aft of the gearshift is a panel of buttons that control traction aids. The Ford Bronco Sport will likely take the Escape’s selectable drive modes a bit further, adding a trail and a mud setting to the on-road–oriented crossover’s Normal, Eco, Sport, Slippery, and Deep Snow/Sand functions.

We’ve received word that the 2021 Ford Bronco Sport has been delayed for the time being while the automaker deals with the coronavirus epidemic. But while an official reveal is still some months away, these spy shots of the compact SUV’s interior give us a better idea of what to expect when the baby Bronco takes a bow.