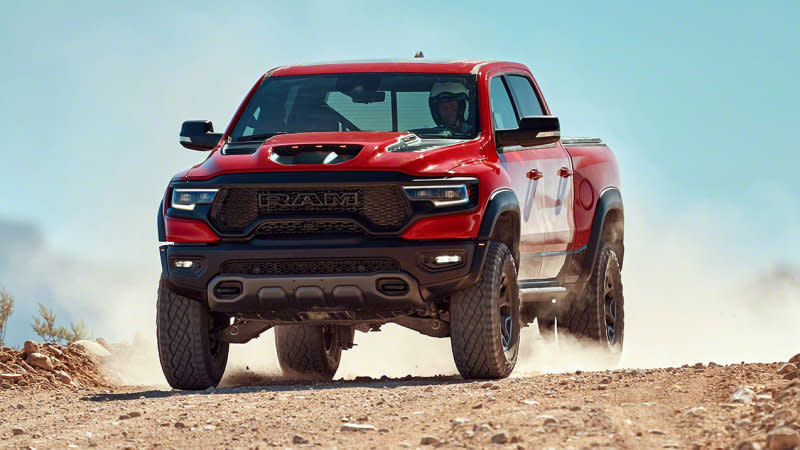 The 2021 Ram 1500 TRX is here, and Ford’s free ride is over with the F-150 Raptor. Ford has had it good for a long time without any significant competition. Neither GM nor FCA entered the off-road full-size truck market with an offering like the Raptor. Chevy makes the Colorado ZR2, but it’s a midsize truck. With the introduction of the Ram TRX, Ford finally has a proper competitor.

Timing of the Ram TRX’s release happens to fall in an in-between time for the Raptor, too. The F-150 is all new for 2021, but Ford hasn’t released any details on the Raptor variant — though, we’ve heard that the wait won’t be long. Regardless, Ford had better be aiming for the moon if it aims to best the TRX, because Ram’s new off-road truck is one hell of a moonshot.

There is a lot to take in here, so we’ve divided the chunks of information into a few digestible sections. Let’s start with the underneath bits, which are arguably the most important of all when desert running and jumping is taken into consideration.

Ram boasts that the frame underneath the TRX is 75 percent different from a regular Ram 1500. It uses thicker high-strength steel with low torsion attributes for stability and durability. The side rails are fully boxed, and sections of the frame are hydroformed. Ram claims its truck holds up to jumping and high impact events better than the competition, which in this case is simply code for the outgoing Raptor. It’s designed to handle rough terrain at 100 mph-plus. Compared to a Ram 1500 with the 5.7-liter V8, it’s 600 pounds heavier. Ram is not messing around here.

Damping is taken care of by Bilstein Black Hawk e2 adaptive shocks, aided by nitrogen-charged remote reservoirs to ensure maximum durability. The shocks will continuously adjust damping force to best handle the terrain, but you can control them via a number of modes, too. Ram says that in addition to the off-road capability, the shocks make for a smoother ride on pavement. The internals of the shocks feature a “Jounce Cut Off” that has three zones for progressive bottom-out control. You know, for when you take that jump at speed on your way to the office.

Just like the other Ram 1500s, this one uses a five-link coil suspension design for the rear. However, the design is unique to the TRX with different hard points to allow room for a Dana 60 rear axle. The independent front suspension has totally new front upper and lower control arms forged of aluminum. They’re designed with additional wheel travel and axle track width in mind. Wheel travel is up big, too, going all the way up to 13 inches, which is Raptor territory.

The wheels and tires are rather special for this truck. Ram asked Goodyear to develop a tire specifically for the TRX, because nothing else on the market would fit. It’s a 35-inch — 325/65R/18 — Goodyear Wrangler All Territory tire that is speed rated for up to 118 mph. Thanks to the tires and the suspension, ride height is up by two inches versus a normal Ram 1500. Ground clearance rises up to 11.8 inches. It has an approach angle of 30.2 degrees, breakover angle of 21.9 degrees and departure angle of 23.5 degrees.

Here’s another great reason to buy a TRX. Just as we thought would happen, FCA has dropped the Hellcat engine into the truck. It makes 702 horsepower and 650 pound-feet of torque in this application, which is good for a 0-60 mph time of 4.5 seconds. It achieves this time using the truck’s Launch Control mode, activated via a big button on the dash. Car and Driver tested the current Raptor at 5.1 seconds, so the TRX is definitely quicker. The quarter mile passes in 12.9 seconds at 108 mph, completely absurd figures for a gigantic pickup. Just like the other Hellcat-equipped vehicles, the TRX gets a ZF eight-speed automatic transmission as standard.

The TRX continues the trend of using creative induction methods to feed air to the beast under the hood. Engineers developed a new dual-path induction system that pulls outside air in via the massive hood scoop and the upper edge of the grille. That air is then ducted into a 29-liter air box that’s designed to ensure water and dirt filters out before it hits the filter elements. Even then, Ram uses heavy duty filters, claiming four times the dust trapping capacity versus the “competition.” It’s all been designed such that you don’t lose performance no matter the terrain or elements you’re subjecting the truck to. By putting the intake inlets high up on the body, it also helped them achieve a 32-inch water fording capacity. Other changes to the Hellcat engine include a high-mounted alternator and a new oil pan for more reliable oil flow over rough terrain and high-G events. A newly-designed three-inch exhaust with unique manifolds lead backward into five-inch exhaust tips. Ram put a mic to it in a presentation for the media. It was properly loud, just like a Hellcat should be.

Of course, four-wheel drive is standard. Ram equips the TRX with a new BorgWarner 48-13 transfer case that features upgraded internals for better durability and performance. This truck is designed for high-speed running, but it also features a low range of 2.64:1 for rock crawling. However, the Power Wagon is likely your better option for low-speed off-roading. The TRX has a locking rear differential, but the Power Wagon has locking front and rear differentials, plus an electronically disconnecting sway bar.

All this truck will also need to be slowed down, and Ram boasts larger brakes than the Raptor. It uses two-piston monoblock calipers to clamp onto 15-inch vented rotors in front and single-piston calipers to grab the 15-inch rear rotors. Just like the Raptor, the TRX can still function as a truck with an 8,100-pound towing capacity and 1,310-pound payload capacity.

Ram went all-out on the design of the TRX. It considers this truck to be the halo product of the Ram brand, so nothing was held back. It’s a full eight inches wider than a standard Ram 1500, featuring composite fender flares to encapsulate the six-inch wider track and one-inch wider wheels. Ram had to shift the front axle forward by 20 mm to make room for the 35-inch tires, too. No face in the truck world looks meaner than this one.

The massive hood scoop and flowthrough black Ram grille are downright menacing. Ram even accentuated the hood scoop design with LED marker lights similar to the design you’d find on the roof of heavy-duty pickups. It has functional air curtains tucked next to the headlights that direct cooling air into the truck. LED marker lights are again found in the back, tucked between the tailgate and rear bumper. A gigantic “RAM” badge is displayed proudly across the tailgate, and a big TRX badge is in the bottom left corner. If you want graphics, Ram has them. This truck’s stance is Raptor-esque with its gigantic tires and exaggerated styling elements. The wide fenders lend it an hourglass shape that’s different from every other Ram in the lineup.

If you plan on rock crawling, full-length rock rails are optional for added protection. There are five total skid plates to protect the front axle, transfer case, transmission pan, fuel tank and a final plate that doubles as a belly pan. Four tow hooks can be found (one at each corner). You’re better off asking what this truck doesn’t have than what it does have.

Even the interior is outstanding. Ram is using the TRX to show off a few new technologies and design elements. There are three trim levels: TR, TR1 and TR2. The base TR is similar to the Ram Rebel interior with cloth and vinyl combined with black and ruby red accents. Opt for the TR1 or TR2, and you get an interior that lives up to the high standards of a Ram 1500 Limited. The truck is outfitted in high quality leather, suede and carbon fiber optionally. Every available option on the Ram 1500 is along for the ride and more. A custom “specifications plate” on the center console is another nice touch. It lists the type of supercharger the TRX uses, boost output, horsepower and the VIN. Now your passengers will always know your truck has 702 horsepower.

As you look around the interior, you’ll notice a few differences between this and the standard 1500. Ram swapped to a console-mounted shifter for performance reasons (you can now shift using the gear lever), removing the twist dial shifter on the dash. It also added paddle shifters on the back of the new flat-bottom steering wheel. The drive mode selector (Normal, Wet/Snow, Off-road and Baja) sits where the twist-dial shifter used to be. Ram has also integrated a head-up display for the first time — this is also a first for FCA vehicles in general. What took so long?

Ram’s 12-inch touchscreen comes standard, and it now features both Performance Pages and Off-Road Pages. A rearview camera mirror just like GM’s rearview camera mirror is optional, another FCA first. The last piece of tech we’ll point out is a trailer backup assist, similar to the one offered in the F-150. You turn the dial in the center stack the direction you want to go, and the truck takes care of everything for you. We have a feeling the head-up display, rearview camera mirror and backup tech will make it to other Rams, too.

By now, you’re definitely wondering how much this beast costs. We saved it for the end, because all the above context was necessary information to understand the price. It starts at $71,690, including the $1,695 destination charge. There will be a TRX Launch Edition version (shown below) in the first year that includes every option in the book and a unique Anvil Gray paint. This one will set you back $90,265. Ram says there will be no volume limits, and there’s no predicted end date for production yet. If you want a TRX, Ram will make you a TRX. You’ll be allowed to order one tomorrow, which is also when the configurator goes live. Ford, you’re up next.