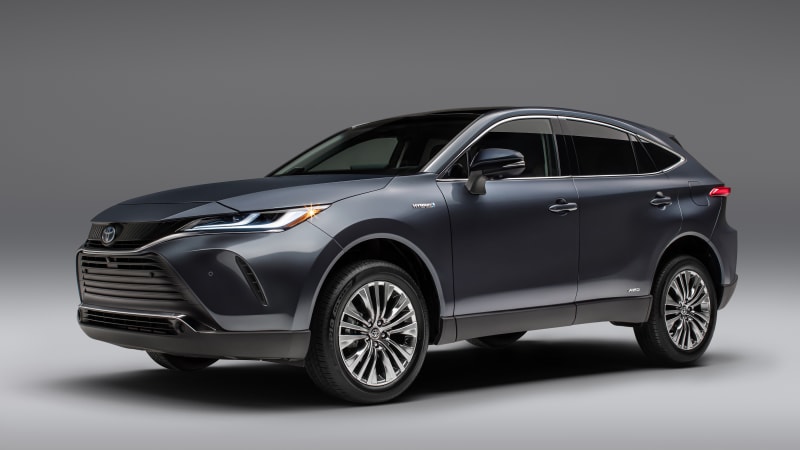 The Toyota Venza is back, but it’s not the same Venture Monza vehicle it was when Toyota discontinued the car-like crossover after the 2015 model year. Instead, the 2021 Toyota Venza is much more SUV-like, and it’s only going to be sold in hybrid form. Measuring in at 186.6 inches in total length, the new Venza aligns itself with mid-size two-row crossovers like the Ford Edge, Honda Passport and Chevy Blazer. Though, it is on the shorter side (by about half of a foot) when compared to all of its future competitors.

Toyota has chosen to go with a highly stylized and sharp design for the Venza, mirroring the approach of others in this segment. There’s some Highlander in there, but the aggression has been turned up a few notches. The Venza shares plenty with other Toyotas, as it rides on the TNGA-K platform that underpins vehicles like the new Highlander and RAV4. We’ve had excellent experiences with new TNGA vehicles from a driving dynamics perspective, so we’re similarly hopeful about the Venza.

There is just one powertrain option available for the 2021 Venza, but it’s an intriguing setup. A 2.5-liter naturally aspirated four-cylinder works in concert with three electric motors for a total system output of 219 horsepower. The setup and power figure is exactly the same as the RAV4 Hybrid. That crossover is able to complete the sprint to 60 mph in 7.8 seconds and achieves 40 mpg combined. Toyota didn’t supply an acceleration time for the Venza, but they’ve projected a 40 mpg combined rating for the base LE trim. Assuming the estimate is correct, that’s an impressive feat for the larger vehicle.

Toyota says it has no current plans to make a PHEV “Prime” version of the Venza. The car is entering as a hybrid-only because Toyota thinks that the hybrid market is underserved for this class. We don’t expect to see a gas-only variant at this point.

There’s no driveshaft to the rear wheels to supply all-wheel drive. Instead, Toyota plants one of the electric motors out back to power the rear wheels when needed. Torque distribution will vary, going from 100:0 front-to-rear to 20:80. Front wheel slip is minimized in quick takeoffs, and Toyota has even built in a mild brake torque vectoring effect for increased agility. Toyota calls it Active Cornering Assist and says it “engages the stability control to reduce understeer in certain cornering situations.”

The battery pack is placed under the rear seats so as not to intrude on interior space. Toyota says the Venza has 36.3 cubic-feet of room behind the second row. That puts it right in the middle of the pack when compared to its contemporaries, with the Honda Passport leading the way. Rear seat legroom is slightly disappointing, though. At 37.8 inches, the Venza is smaller than anything else in its class.

Toyota has taken the high style route for the interior, too. The blue and brown colors (pictured above) have our attention, and the sharp interior design is keeping it. That center stack is different from any other Toyota on sale today. It doesn’t even have a volume knob, instead opting for touch capacitive controls. The screen pictured here is the 12.3-inch touchscreen that’s optional on the XLE and standard on the Limited trim. An LE or XLE comes with an eight-inch touchscreen as standard equipment. The smaller-screened vehicles also have traditional button controls instead of the touch capacitive ones. Regardless of screen size, Toyota has made Apple CarPlay, Android Auto and Amazon Alexa standard. From photos, we can tell it’s the same software that runs on the new Toyota Highlander.

There’s plenty more tech to go on about, too. Toyota is particularly proud of its fixed panoramic roof glass. It’s an electrochromic panel of glass that you can make transparent or “frost” depending on what kind of interior experience you’d like. When “frosted,” the glass reduces the amount of sunlight it lets through. The instrument cluster isn’t entirely digital, but depending on the trim, you get a 4.2-inch digital display or a 7.0-inch digital display. Forward of that is an optional 10-inch heads-up display. But wait, there’s one more screen; also available optionally is a digital rearview mirror you can flip on to reduce headlight glare or see around things blocking the traditional mirror’s view.

Toyota’s navigation system has a second purpose in addition to providing directions. It will analyze road conditions and your driving habits to optimize recharging of the battery. If you select the Predictive Efficient Drive function, it’ll learn your repetitive routes and predict when and where the vehicle is likely to slow down. Then, it’ll guide you on the optimum pedal release timing for maximum energy regeneration and reducing energy consumption. In downhill sections the car will apply additional engine braking force for better charging of the battery when the accelerator pedal is released. Another energy saving technology is stolen from Lexus. It’s called S-FLOW, and it’s designed to only direct air conditioning to people in occupied seats. Heated and cooled front seats also come into the equation depending on the trim level.

Toyota has loaded up the Venza with all of its safety equipment as standard. That means even premium features like adaptive cruise control, lane-centering, blind-spot monitoring and rear cross-traffic alert are standard.

Pricing hasn’t been announced yet for the new Venza, but we suspect it’ll land in the same ballpark as vehicles like the Honda Passport and Ford Edge. That suggests a starting price in the low $30,000 range, arcing up past $40,000 for fully loaded models. Toyota says the Venza should hit dealerships sometime in August this year.