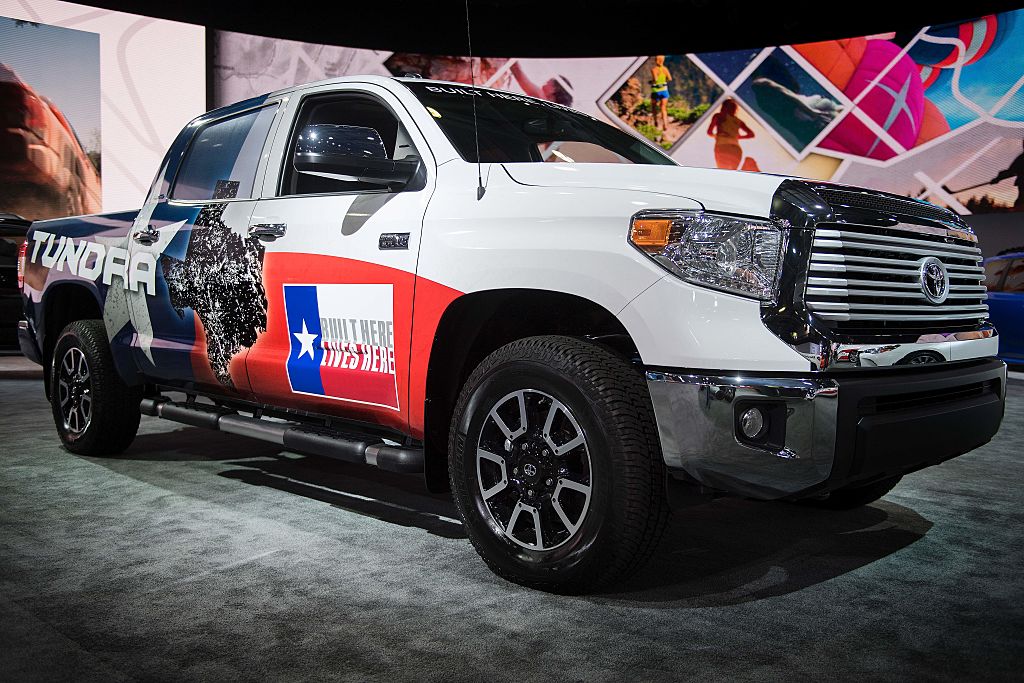 Leaked spy photos have revealed the impressive interiors of the 2022 Toyota Tundra, which has excited fans of the mid-sized truck.

Quite remarkable in the 2022 Toyota Tundra interior is the eye-catching infotainment screen, extending slightly above the dashboard, unlike the current truck’s in-dash screen. The photos also showed that the car has Apple CarPlay that looks bigger than the screen it replaces. However, this large screen may be an optional upgrade, Motor1 posted. The smaller in-dash screen could be the standard feature.

A red stripe can also be seen on the steering wheel with JBL speakers below the A-pillars underneath the grab handles.

As previous reports revealed, the 2022 Toyota Tundra exudes an astonishing, bold design and this could reflect in its interiors. But the leaked spy shots do not show much, except for a windshield, a rearview mirror, a steering wheel and that dashboard with a small infotainment screen. The leaked images also suggested that the 2022 ToyotaTundra would get a panoramic sunroof for some trim levels, Autoblog reported.

While these aren’t much of a surprise to Tundra loyalists, the spy shots revealed more new details on the truck. The photos did not show a top-level Tundra, though, as proven by the small size of the infotainment screen and gauge cluster with actual gauges–and a not digital screen.

The gauge cluster showed a tachometer with a redline at about 5,750 rpm, which is no different from the iForce V8 engine in the current Tundra, Driving noted. This means the current engine could be offered as an option, together with the hybrid powertrain.

The photos also displayed the interiors bearing shiny black and matte silver plastic, which were popular design trends decades back. But the styling is striking, with a more ergonomically designed layout than the predecessor model, Autoblog further shared. Prominent are those dials and buttons that are far from the driver and may take effort to reach.

Another digital touchscreen was seen below the dash touchscreen that show some traditional display tech. A USB plug is also located on the right, with levers separating the screen from a set of buttons. Below the center stack are a console-mounted shifter apparently for the 2022 Tundra’s 10-speed automatic transmission, and another set of levers and buttons, most probably for gear selection.

On the 2022 Toyota Tundra’s exterior, previous leaks show an edgy, awesome design that presents a resilient and tough TRD Pro model, with LED headlights and running lights located above a vertical air intake. Its massive grille has three LED light strips: one below the Toyota logo, two on the outer edges above the bumper. Indeed, the front grille design gives an impression of a fierce roadster.

The photos revealed the truck in black and red panels with a blacked out window trim, wheel-arch extensions, and a very clear TRD-Pro badge on the tailgate.