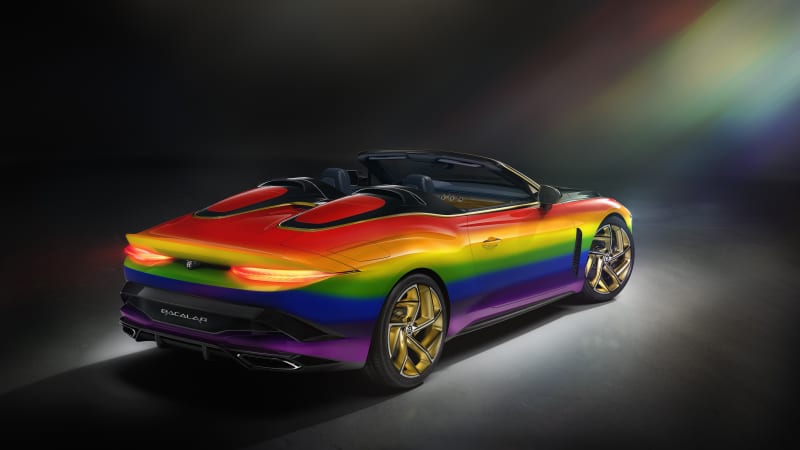 You’re looking at the winning entry in an online competition Bentley held recently for colleagues and their families to design their own Mulliner Bacalar, a two-seat roadster of which only 12 will be built. No, there are no plans to build this one, and the rainbow motif on the livery is a nod to the symbol of hope during the COVID-19 pandemic. Still, it’s fun to imagine the head-turning you could do driving it.

We’re told only that the winning design comes from someone named Eleanor, and Bentley adds the disclaimer that “anyone is able to imagine their dream specification from Bentley’s unrivaled spectrum of interior and exterior colours,” so technically, we guess it’s possible that one of the customers who’ve signed up for one could order this for production. There are also lots of other ways to customize the topless car, inside and out.

The colors in the rainbow include Dragon Red II, which features on the launch of the Continental GT V8 back in 2012, and the Orange Flame used to introduce the Bentayga Speed more recently. Bentley used Yellow Flame to launch the Bacalar.

Bentley also held a contest for interior design but hasn’t yet shared that winning entry.

The competition was judged by design boss Stefan Sielaff, who previously told Autoblog about how the Bacalar coachbuilding project grew out of requests from well-heeled customers for an ultra-exclusive, customizable product and arrived in just nine months. Inspired by the EXP 100 GT electric concept, the Bacalar uses a 650-horsepower 6.0-liter W12 engine. All 12 are already spoken for at a reported starting price of a cool $2 million.