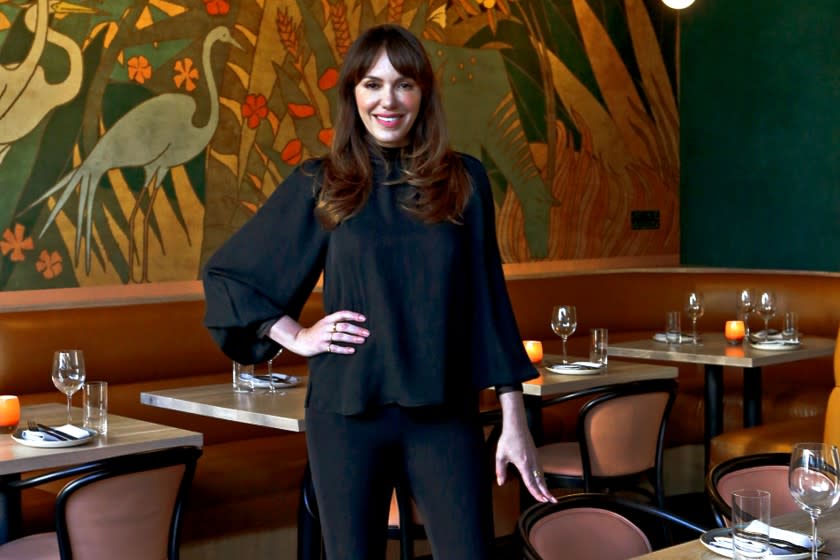 When downtown L.A. restaurant Red Herring updated and upscaled its former Eagle Rock iteration, the project also became a bold debut for interior designer Marissa Zajack, who used her background in film and television to tell a vibrant and transportive “visual story.”

The relocated Red Herring opened in December 2019, the love child of husband-and-wife team Dave Woodall, the chef, and Alexis Martin Woodall, president of Ryan Murphy Productions. Zajack’s credits include graphic design for shows and movies such as “Zombieland,” “New Girl,” “Bombshell” and the upcoming “The Boys in the Band” on Netflix.

Martin Woodall met her when they worked on Murphy’s 2006 movie “Running With Scissors,” and since then has tapped Zajack for design advice and small jobs at the old restaurant, which closed early last year. The scope and undertaking of Red Herring 2.0 was new territory for them both.

“I didn’t exactly know what I was getting myself into, but was so honored that Alexis asked me,” Zajack said. “Years working in the art department on TV and film is similar in some ways to the interior design process, but there were definitely things that didn’t carry over, which were new and exciting for me,” like understanding building codes and the durability of materials.

Her background in graphic design, however, proved a huge asset for detailed aesthetic continuity — she digitally designed the interiors, furniture, fixtures and marketing, and even handled the branding, down to business cards and way-finding signs.

Zajack commissioned artist Mike Willcox for the restaurant’s show-stopping mural, a colorful art deco-inspired jungle scene spanning the entire back wall of the dining room. She printed his artwork on wallpaper, then aged it to make it feel vintage — “less computer-generated and more painterly and unearthed with history.”

Thematically, Zajack said the whole decor was about celebrating “the spirit of California, past and present” — a place “that was fun and sexy, timeless yet modern, where you could go day to night.”

She even imagined a fun back story: “Some fabulous woman owned it that had wonderful dinner parties for all of her fabulous friends; a Dorothy Parker type. Decadent, elegant and whimsical, but nothing too serious. It had to be joyful.”

How did you get your start in design?

I grew up in Southern California; my dad was an advertising photographer and my mom worked in his studio. I went to college for fine art at ArtCenter in Pasadena, and then got interested in fashion and worked for Libby Lane in Beverly Hills. Then I segued to working in the art department for film and television for about 15 years. I was really interested in graphic design in film because you could really tell a story through the graphic elements, especially if you’re working on a show or film that’s based in a different time period.

What are some of your aesthetic trademarks?

The graphic element, like custom wallpaper and adding graphic geometry into a space. For furniture, I really like soft curves and use a lot of blush and brass elements. I’ve called upon some of the artists I worked with on the restaurant in other projects, like the lighting designer Dora Koukidou, who is out of Greece. I loved her light fixtures and I wanted a custom piece for the bar area at the restaurant, for a bold statement.

The color scheme is amazing.

I love the way Mike Willcox’s work and the rest of the colors go together. There’s a delineation from the bar area to the dining area, which is a lot more jewel-toned because there’s a lot going on with the mural. But in the bar area there are more pastels and washed corals. They feel cohesive but also two very different spaces at the same time.

What projects are you working on right now?

I’m working on my own home at the moment, which is really exciting. It’s in a historic building in Koreatown on Wilshire called the Talmadge. Red Herring was a full build-out, but this is working on a historic interior and beautifying something that is already beautiful. One of the first rooms you walk into is filled with molding and hidden bookcases; it’s pretty spectacular.

Because you’re working on your own home during social distancing, could you offer any advice on ways we can all elevate our spaces during this time?

A lot of it is being super frugal and using what’s on hand. I’m organizing and finding treasures that might have been hidden in a closet. Or repurposing something out of the archives and breathing new life into your space. And water your plants, because you want to keep them around during this.