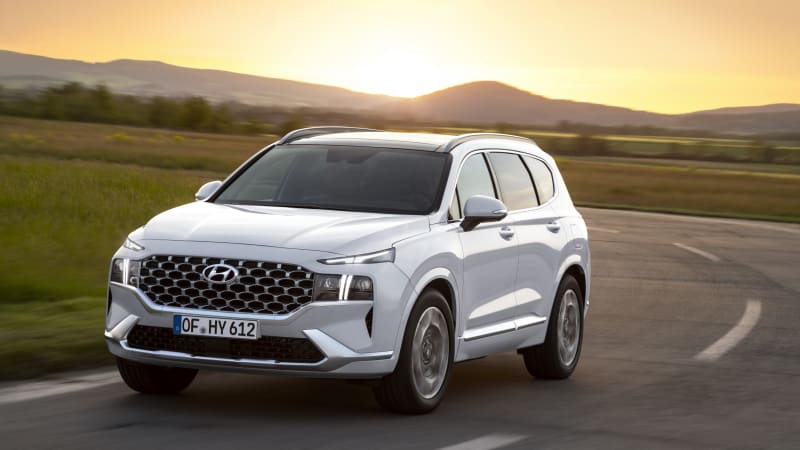 BMW isn’t the only carmaker pushing its design language in a more expressive direction. Hyundai introduced the fifth-generation Santa Fe with a head-turning look, available hybrid power, and plenty of technology inside.

Hyundai’s bread-and-butter SUV has come a very long way since the original model made its debut in 2000. While some of its predecessors leaned towards the anonymous end of the design scale, the new Santa Fe stands out in a growing segment with a wide grille underlined by a strip of bright trim and headlights split by T-shaped daytime running lights that look a little bit like Volvo’s Thor’s Hammer lights rotated by about 90 degrees.

Its side profile and overall proportions are very similar to the outgoing model’s. Out back, the T-shaped motif appears again and a thin light bar accentuates the Santa Fe’s width. Hyundai noted it made the wheel arches a little bit wider to convey a sense of power and filled them with 20-inch alloy wheels. Some will love the look, and others will inevitably hate it. What’s certain is that it won’t fly under the radar, and that’s what stylists aimed for.

Hyundai retained the outgoing Santa Fe’s basic interior layout but made it more comfortable and more spacious. It said every component is finished in premium soft-touch material, and it pointed out the high center console makes the front passengers feel like they’re sitting in an armchair. We’ll rate its living room quotient when we get the chance to sit behind the wheel. In the meantime, we don’t need to leave our own armchair to see interior designers carved out additional storage by replacing the gear selector with four buttons on the center console.

The driver faces a 12.3-inch digital instrument cluster, though we don’t know if it’s standard across the range or limited to upmarket trims. There’s also a 10.25-inch touchscreen for the infotainment system propped up on the dashboard. Its cargo capacity hasn’t been published yet; for context, the Santa Fe currently found in showrooms offers 35.9 cubic feet of space behind the second row and 71.3 cubes with the rear seats folded.

Hyundai isn’t ready to talk about technical specifications for the American market, but it confirmed the European lineup will include hybrid (pictured) and plug-in hybrid options as well as gasoline- and diesel-burning burning-cylinder engines. The Santa Fe is built on the same N3 platform as the latest Sonata, and the architecture was developed with electrification in mind from the get-go. With that said, we’re not expecting a fully electric model.

Front-wheel drive and an automatic transmission will come standard, and all-wheel drive will be offered at an extra cost. Models with four driven wheels will receive Terrain Mode technology that lets the driver use a center console-mounted knob to select one of several driving profiles including sand, snow and mud, eco, sport, comfort, and smart. The last two analyze the driving style and automatically select the most suitable profile.

The fifth-generation Hyundai Santa Fe will arrive in American showrooms before the end of 2020 as a 2021 model. American market-specific information (including pricing) will be released in the coming weeks.