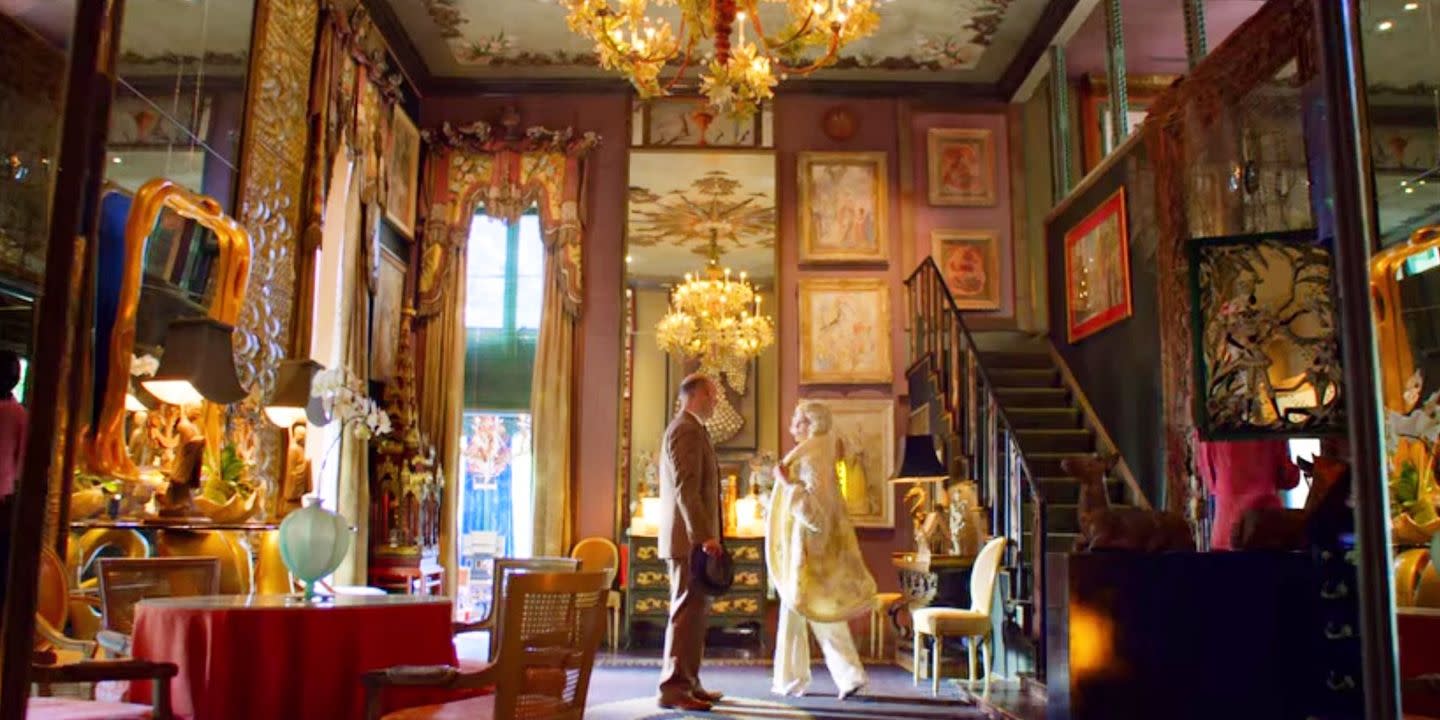 Oftentimes, the legacies of design greats are just that: legacies. There are many instances where no tangible remnants of these influential designs are still standing—no rooms left as they were once decorated by a famous designer touch. Thankfully, though, in some cases homes remain nearly exactly as the designer left it, like at Dawnridge, Tony Duquette’s former home in Los Angeles. Just last week, design lovers were treated to a feast for the eyes when Ratched—a series based on the eponymous character from the novel One Flew Over the Cuckoo’s Nest—premiered on Netflix, including several episodes that were shot, in part, at Dawnridge. This tangible piece of design history can be seen in its full splendor starting with episode three, “Angel of Mercy,” where the estate serves as home to the glamorous heiress Lenore Osgood, played by Sharon Stone.

To further explore the world of Dawnridge and its role in Ratched, we spoke to Hutton Wilkinson and set decorator Matthew Flood Ferguson to learn how this extraordinary site came to be a part of this series, including a lesser known connection to one of the show’s stars—and another famous former residence that served as inspiration for Osgood’s estate.

Dawnridge’s appearance in Ratched is not the first time we see a Tony Duquette creation in a Ryan Murphy-helmed show: A glazed turquoise fireplace that Duquette designed in the 1940s for costume designer Adrian Adolph Greenburg’s Bel Air home can be seen in season one of The Politician. Clearly, Murphy knows his interior design history, and it was only a matter of time before the stars aligned and an entire house designed by Tony Duquette was cast in a Ryan Murphy production.

Although Dawnridge is not open to the public, it is occasionally used for photo shoots (see the cover shoot for the October 2020 issue of Town & Country, or Tom Hiddleston’s Gucci ad campaign), as well as film, television, and music video shoots (Florence + The Machine’s “Hunger” music video was shot at Dawnridge). So, how did Dawnridge snag its role in Ratched? Well, Sharon Stone and Tony Duquette were actually neighbors and close friends. The actress once lived right next door to Dawnridge, and the duo was even photographed together at Duquette’s house for the October 1999 issue of Town & Country. Given Stone’s personal connection to both Duquette and Dawnridge, it was only fitting to set her character’s home here (and to photograph Stone at the same site, for the same magazine, 21 years later).

Of course, Dawnridge made the final cut, but a different, equally impressive abode was on the inspiration board when planning out this series. Set decorator Matthew Flood Ferguson tells House Beautiful that “the visual inspiration for Lenore Osgood’s home came from Doris Duke’s famous Hawaiian mansion, Shangri La,” which has since been turned into a museum of Islamic art, culture, and design, located near Honolulu. “Completed in 1938, it took the American tobacco heiress almost five years to construct the lavish estate and to this day it remains one of the most beautiful and written about mansions,” adds Ferguson. Ryan Murphy “mentioned Doris Duke’s Hawaiian estate as an inspiration for the character Lenore Osgood’s home—the idea being that Lenore Osgood and her son lived on some tropical Hawaiian island.” Evidently, Dawnridge’s eccentric gardens and interiors matched this vision perfectly.

It may appear like Dawnridge was the sole filming location used for Osgood’s mansion, but that was actually not the case—it was just movie (or Netflix series) magic. Hutton Wilkinson shares that “the bedroom scenes were all photographed on a soundstage—that is not the bedroom in the house,” but “the actual bedroom at Dawnridge inspired the set designer up to a point.” This was likely done due to the need for extra room for the many cameras, cast, and crew.

Fortunately, only a minuscule amount of alterations were made to Dawnridge’s interior decor for its cameo in Ratched. Ferguson tells us, “We brought in quite a few pieces: The coral side chairs, the red and black lacquered coffee tables, the period lamps, and so on, but never straying too far from Tony Duquette’s design aesthetic and palette.”

Just like many other Ryan Murphy creations, Ratched has a distinct aesthetic, thanks to eye-catching set designs and filming locations that we can’t help but fawn over. As Ferguson points out, “green was such a predominant color for our show, so we tried to incorporate it as much as we could into every location we filmed in.” Take a look at just about any photo of the interiors (and exterior) of Dawnridge, and you will see countless variations of green, usually in some form of malachite—a vibrant, viridescent gemstone that is believed to assist with manifestation and balance, and was a signature of Duquette’s, who designed a now-iconic fabric based on it. All throughout the house, both actual malachite and fabric versions of it can be found on numerous pillows, tablecloths, carpets, walls, plates, and furniture.

I think it’s safe to say that we don’t need any further convincing—we know what we’ll be binge-watching next!