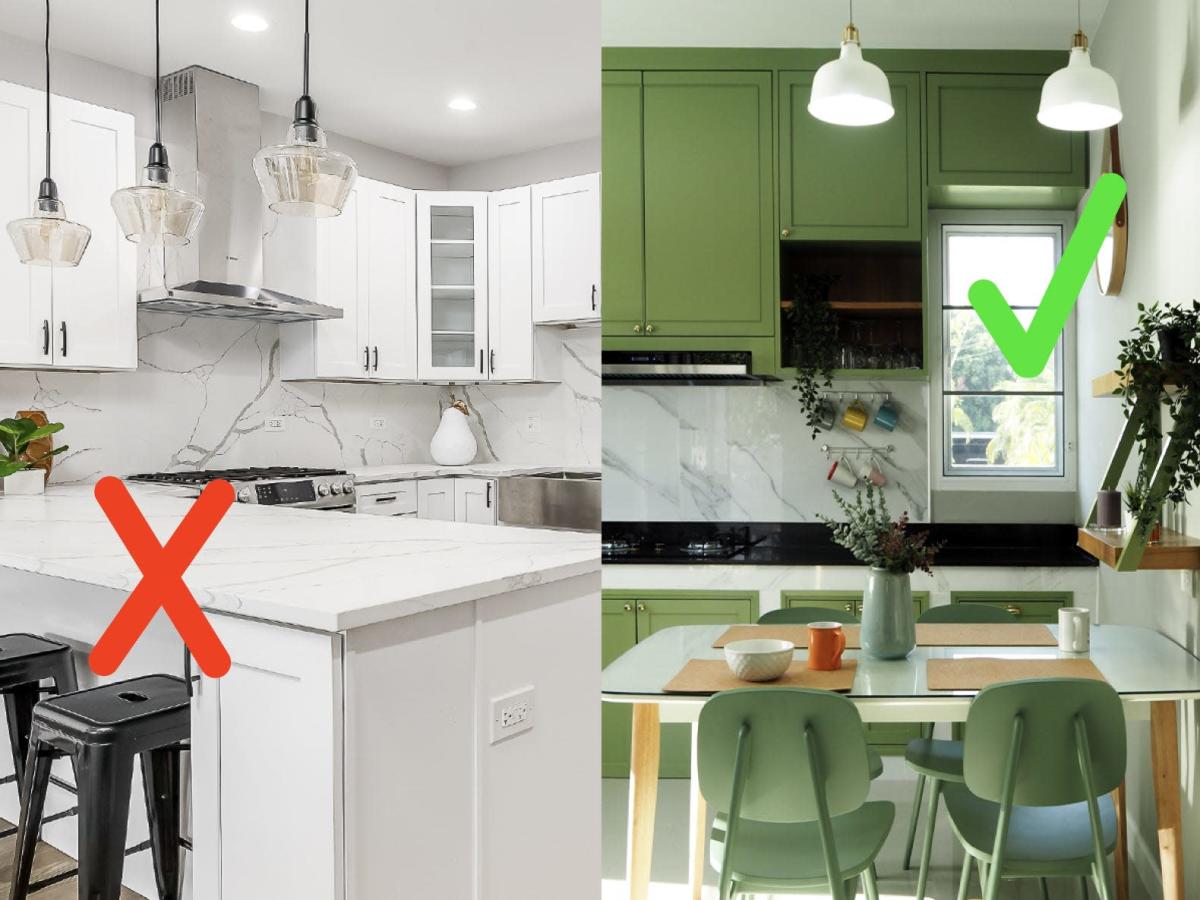 The kitchen designer Susan Serra of Susan Serra Associates, told Insider we should expect to see more black ranges in 2022.

“An uptick in black ranges reflects an elegant and dramatic focal point for the kitchen,” Serra said. “Tying in other black accents without an overabundance of black creates a look that is stylish yet easy to live with.”

Smaller black accents like knobs and handles can complement a dark-colored range and create a sleek look.

Open-concept kitchens are great for entertaining and multitasking, so it’s no surprise that they’re trendy.

“The open-plan concept is contingent on space, but generally, we are still seeing a desire for open floor plans,” Bob Bakes, cofounder of and head of design at Bakes & Kropp, told Insider.

“The need to separate the kitchens as a separate room is an old concept, and I don’t think it’s making its return quite yet.”

All-white kitchens could be dwindling.

Though all-white kitchens have been popular, this clean and classic design choice might be disappearing soon.

“Pristine all-white, sleek, super-modern kitchens are on their way out because they tend to feel cold,” the designer Andrea Subotovsky at Italkraft told Insider. “Instead, we see more nude tones and taupes. These colors are popular because they’re light neutrals that will give you a clean, spa-like monochromatic look without it feeling so cold.“

According to Subotovsky, the upkeep that goes into maintaining an all-white kitchen, like wiping down the countertops, cabinets, and floors, might also repel people from the design choice.

Kitchen islands often serve as a multipurpose hub, and their popularity is expected to increase in 2022.

Andra DelMonico, the lead interior designer at Trendey, believes that this trend is here to stay since islands offer extra workspace.

Though painted cabinets aren’t expected to disappear, homeowners will make more decisions regarding which type of wood to use for a nice, unpainted look.

This year, homeowners are expected to favor smaller appliances like instant pots and air fryers over space-consuming double ovens.

“Never has there been so many types of ovens, both portable and built-in,” Serra said. “Homeowners, especially those with medium to smaller kitchens, are rethinking double ovens in favor of one conventional oven plus a steam oven or other countertop and portable oven.”

Green will be a popular color choice.

Though accenting kitchens with pops of color isn’t new, more green will make its way into the design.

“Given that Sherwin Williams and Benjamin Moore colors of the year are both muted, dusty greens, I think we will see a lot of lighter and more nuanced greens,” said Libby Rawes, the principal designer for Sharp and Grey Interiors. “Green looks beautiful with hardwood floors or butcher-block countertops.”

Low backsplashes seem to be going out of style.

Low backsplashes have been trending for years, but they are losing popularity.

For homeowners who still want to incorporate a backsplash in their design, DelMonico suggests extending the design feature to the bottom of your cabinets or up to the ceiling around your stove’s hood.

Though brass hardware has been trendy, touches of this metal may be going out of style.

“Brass hardware is going out,” said Marco Bizzley, an interior designer at HouseGrail. “People aren’t going to want to have them on pantry or shelving but instead are going to be replacing them with brushed nickel, glass, or stainless steel.”

Read the original article on Insider