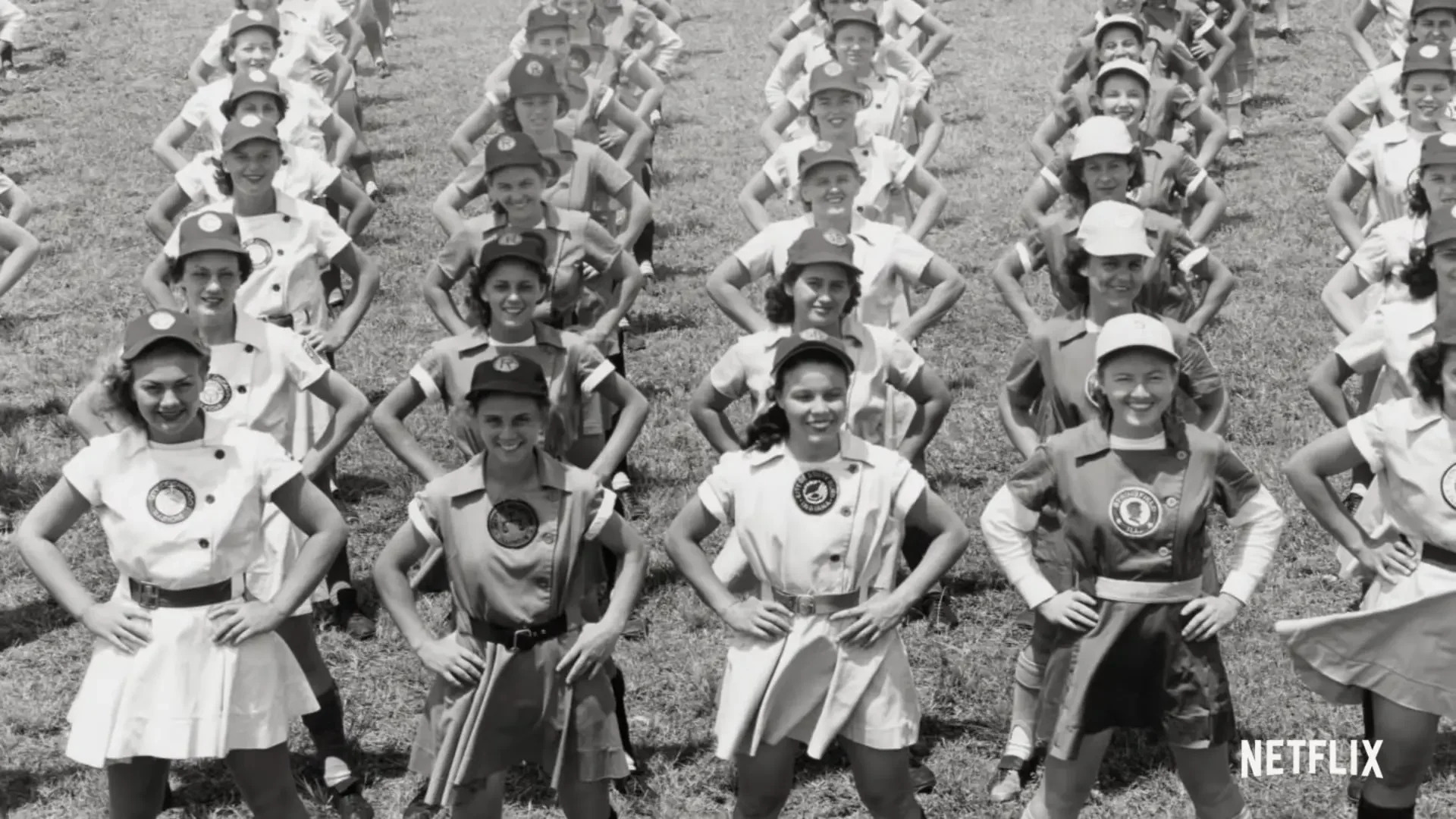 While the 1992 favorite A League of Their Own focused mainly on Rockford Peaches sisters Dottie Hinson (Geena Davis) and Kit Keller (Lori Petty), there are dozens more movie-worthy stories that remain untold from the WWII-era All-American Girls Professional Baseball League (AAGPBL).

The new Netflix documentary A Secret Love is now revealing one such tale: the riveting, tender and deeply touching story of the 70-plus-year relationship between Peoria Redwings catcher/utility player Terry Donahue and her longtime partner, Pat Henschel, who maintained to their families that they were just close friends — and to others, “cousins” — before coming out well into their 80s.

“She was the love of my life,” Henschel, 91, told Yahoo Entertainment in a recent phone interview of Donahue, who died in 2019 at the age of 93. “She was my life. She was absolutely my life.”

Directed by Donahue’s great-nephew Chris Bolan, A Secret Love traces the women’s relationship back to 1947, when the Saskatchewan natives met in the maybe the most Canadian way possible — playing hockey together in the city of Moose Jaw. Donahue was a year into her four-season career in the AAGPBL, though was not yet aware of her sexuality.

In fact, as Donahue recalls in the doc, she and another baseball player were so worried about gay women in the league coming onto them at the time, they would barricade themselves inside their room at night, blocking the door with a chair. “I had never heard of those kinds of girls,” Donahue says in the film. “I didn’t want them in my room.”

Everything changed when she met Henschel — although the women recall feeling like they were “the only two people in the world like this.” The pair left small town Canada for Chicago, where Cubs owner and chewing gum magnate Philip K. Wrigley had first established the AAGPBL before expanding into 10 cities across the Midwest. And while Chicago may have been more progressive than Saskatchewan, it was still the 1940s, when arrests from raids of underground gay clubs or public outings of homosexuality in newspapers ruined peoples’ lives on the regular.

Since they had each other, Donahue and Henschel rarely ventured to such venues. They formed a small community with other gay couples and ultimately settled into a house in St. Charles, 40 miles west of the Windy City. The women told relatives and colleagues at the upscale interior design firm that they worked at in the city that they shared living quarters to save on rent. It’d be decades before they told their families the truth.

“There was speculation over the years, our family had internal conversations wondering if they [were gay],” says Chris Bolan, whose mother, Diana, a prominent figure in the documentary, was so close to Terry she considered her more of a mother figure than aunt. “But honestly they were asked a number of times point-blank, were they a couple? Were they gay, were they lesbian? And every single time they just said, ‘No. We’re just good friends.’ So we just left it at that.”

In one of the film’s most poignant sequences, Donahue and Henschel rifle through a box of love letters they’d penned to one another — all with the signatures ripped off in case anyone discovered them. Yet as the couple entered their twilight years, they worried about one of them passing, and their families discovering their true identities only after the fact.

In 2009, Chris Bolan had just finished grad school when he and his wife visited his great aunts in Chicago. They had all just finished lunch and were sipping rum-and-cokes, Pat and Terry’s libation of choice, when the women made their revelation. Boland and his wife hugged them and offered words of support. “And once they saw our reaction, the floodgates opened up and they were like little giddy schoolgirls recounting their entire life that afternoon,” he says. “I was like, ‘I have to tell this story.'”

Bolan eventually brought the project to Alexa L. Fogel, a veteran casting director (Oz, True Detective, Atlanta) he had met as an actor. Fogel came on with her producing partner Brendan Morrow, and they also lured bold-faced names like Ryan Murphy and Jason Blum onboard to lend some additional heft. (Fogel credits Glee, American Horror Story and Pose co-creator Murphy, especially, with helping hone the doc’s portrayal of its rarely depicted love story between older women.) “It’s such a crazy unique story kind of coupled with the question, ‘Who bothers to come out at age 80 years old?,'” Morrow says.

Shot off and on over four years, the film not only recounts the couple’s amazing past but confronts dilemmas they face as the cameras roll — like Donahue’s hesitation to officially tie the knot even as marriage equality legislation goes into effect around the nation, and Henschel’s resistance to moving out of their longtime home as Donahue’s health worsens from Parkinson’s disease.

It also digs into the sporting days of Donahue, who describes living through scenes made famous in A League of Their Own (i.e., charm school for the female athletes), recalls the notion that they were expected “to look like ladies and play ball like men” (the women famously forced to slide while wearing skirts) and cheerily carries autographed baseball cards with her at all times to hand out. “Her two loves were Pat and baseball,” says Chris Bolan, quoting his Aunt Terry.

A Secret Love indirectly brings to the forefront an aspect of the AAGPBL that, as beloved as A League of Their Own is, has been critiqued for glossing over in more recent, more enlightened years. “I think a lot of the baseball players were gay, but mainly they kept it very quiet, just away from the public,” says Henschel, who traveled with Donahue’s team for a couple weeks in 1949, and regularly attended reunions with her in more recent decades. (The couple also visited the set and snapped photos with director Penny Marshall and Madonna.)

In retrospect, it’s somewhat surprising that League did not feature any lesbian characters, even in supporting roles. Especially given the talent involved in making it. Marshall and Madonna have both considered gay icons over the years, and costar Rosie O’Donnell came out in 2002. And it hasn’t stopped fans from labeling it as “secretly gay.” Then again, it was the early 1990s — eons ago in the evolution of gay rights and LGBTQ awareness; the film was released at a time when the vast majority of onscreen depictions of gay characters involved the AIDS epidemic (Longtime Companion, Philadelphia).

That was never an issue for Donahue and Henschel, who proudly sports a couple different sweatshirts from the film (one touting Tom Hanks’ oft-quoted “There’s no crying in baseball!” line) in the documentary. “We were absolutely thrilled. It was so exciting to see,” Henschel says of League.

That combination of heightened awe and lack of resentment is an attitude that extends to Donahoe and Henschel’s views on their relationship, and the film being made about it. This was no tragic love story. There’s no contempt toward a society that made them conceal the true nature of their bond, or family members who turned their backs on them. There are no regrets about not coming out sooner so that they could have lived a “freer” life. “We were just so happy,” Henschel says. “They had a remarkable life, so they didn’t feel closeted in any way,” adds Fogel. “They just had these different components of their lives. … I just don’t think they ever felt that they were hiding. They didn’t feel like calling themselves ‘cousins’ was a hardship.”

Throughout the film’s production, the women were perplexed why anyone would want to make or see a movie about them. Henschel still doesn’t, even as A Secret Love (which was originally slated to premiere at March’s SXSW Film Festival) collects glowing reviews. “I’m just amazed that anybody even cares. It was just a normal kind of life for us,” says Henschel. “We just thought our lives were ordinary and couldn’t imagine anybody being interested. That’s the truth!”

Both women, however, recognized their story’s potential in comforting younger generations. “I remember one time Auntie Terry looked at us with those big blue eyes of hers,” recalls Diana Bolan. “She said, ‘If this documentary helps just one person, it will have been worth it.'”