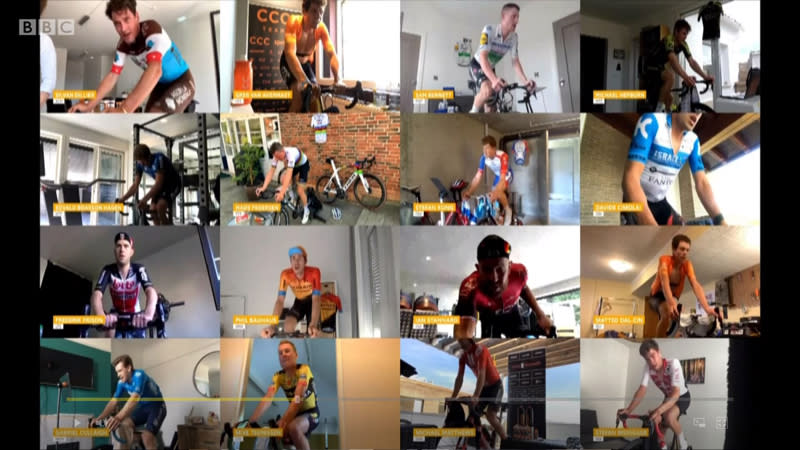 When the 2020 cycling season was put on hold, it wasn’t long before cyclists the world over took to their turbo trainers in a bid to avoid detraining and get their competitive fix. Indoor cycling boomed as weekend warriors and Tour de France winners alike took to platforms such as Zwift, TrainerRoad and Bkool.

In response to the postponement of events, indoor cycling apps have been utilised to great effect, to run races such as the Flanders Lockdown Edition and the Ronde Van Zwift. This week it was the turn of the Digital Swiss 5 – a Bkool based five-stage digital version of the race that should have happened at the same time, the Tour de Suisse.

Without the typical moto cameras of Bettini and Getty Images on hand in the virtual world, the BBC, who live-streamed each stage of the Digital Swiss 5, used video call technology to showcase the riders in live-action, but riders are also taking to their own social media accounts to showcase their setups to the world.

It’s not uncommon for amateur riders to want to emulate their heroes by using the same bike, kit, shoes etc. The same goes for turbo trainers, and the indoor cycling hacks used by pros can be replicated at home.

As with pain caves part one, riders went to tremendous effort to feature their sponsors in the background of their pain cave pics, with sponsor-correct towels, advertising boards, race jerseys, and even a whale – yes, a whale – providing added flair to riders’ pain cave game.

Below we run through some of the best and worst pro pain caves and rate them – on a completely unscientific and probably unfair basis – but our word is final.

Fred Wright’s pain cave could be in his bedroom for all we can tell, but we think it scores well. It’s not a polished pain cave, that’s for sure, but points are awarded for the sponsor-showcasing jersey and helmet.

His use of a Wahoo Kickr is far from a bad choice, and the decision to race his Merida Reacto will pay dividends. We can’t see a fan, but we’ll give him the benefit of the doubt on this one. Bahrain McLaren’s neo-pro might be new to the WorldTour, but he’s on the track for success with a setup like this.

With that background, there’s no mistaking who this pain cave belongs to. Some might say he’s milking it, but if we were Mads Pedersen, we’d have probably painted our house in the rainbow stripes.

The decision to take a pain cave outside is a brave one, especially on warmer days, but given Pedersen is another without a fan on show, we’ll assume there was a breeze to help – or maybe, just maybe, he thrives in tough conditions.

The decision to race the Domane will undoubtedly offer a more comfortable and upright position, but for shorter races, we’d have opted for the stiffer Madone.

Canadian Matteo Dal-Cin hasn’t given much away with his pain cave camerawork, besides the unnecessary addition of a Garmin Edge 1030. He quickly learned that the decision to wear his Rally Pro Cycling jersey was a foolish one, and the zip was promptly undone.

The pain cave’s addition of perfo panelling to hang his tools is one we can get behind, and the clothes rail is a perfect place to hang the next ride’s kit.

There are things we’d do differently, but there’s one thing in Dal-Cin’s pain cave that negates all other faults and automatically warrants a five-star score. This stand-out feature is the Wattage Beluga artwork on the wall. The Canadian’s mascot clearly provided him with extra watts, as he put in a good showing of himself throughout the digital race.

It’s good to see both sides of cycling combining in digital racing, as multiple-time mountain bike world champion joined the pro peloton’s latest race. Nino Schurter doesn’t give much away with his pain cave camerawork, but there’s a couple of things worth noting.

Despite the BBC’s inadvertent attempt to hide it, we must give Schurter points for his carefully curated sponsorship board, but the decision to hang a hat from his handlebars seems a strange one.

Also, with the microphone ready, we were disappointed that Nino didn’t break into song.

Stefan Küng showed off his time trialling ability, winning stage 2 of the digital race, but we’re here to score him on his pain cave, not his pedalling prowess.

Like Oliver Naesen from pain caves part one, it looks as though Küng has been locked up in a prison cell or underground bunker for his indoor cycling endeavours, but he’s done well with the interior design. The TT bike makes for good wall art, and the jersey placement in the background will please his sponsors.

The pairing of the Elite Drivo trainer and Elite trainer mat makes sense, but the untidy cabling loses him a couple of marks. The decision to wear a skinsuit is as brilliant as it is terrible, but we applaud the four bottles he’s got prepared.

We’re disappointed that he didn’t ride the new Lapierre Aircode, but we’ll let him off.

Jan Tratnik’s been taking part in Bahrain McLaren’s team rides on Zwift, and we’re not sure where to start with his pain cave. The choice to wear just bib shorts is a good one, and there’s nothing wrong with Zwifting in a TT position.

It seems Tratnik has taken over his local massage parlour for his Zwifting endeavours as there’s a massage table in the background, as well as what looks to be a hammock. The plant scores him extra points, too.

You can’t see it here, but he’s using the Elite Drivo turbo trainer, paired with the Elite turbo trainer mat and even an Elite towel – a branding masterclass – but there’s no fan, so we’re docking points – sorry Jan.

When you’re sitting pretty atop the unofficial Zwift leaderboard, it makes sense that you have a pain cave akin to something you might see on MTV Cribs. Well, this is very much where the magic happens for Edvald Boasson Hagen, who’s racked up 19,375km at the time of writing.

He clocks his virtual miles aboard a Tacx Magnum – one of those treadmill-styled turbo trainers – in his nightclub-esque pain cave that also houses a weights station.

He’s not giving much else away, but we’re imagining it’s also got a surround sound speaker system and strobe lighting for whenever he drops an aero power-up.

After Nicolas Roche received just a two-star rating in part one of our pain cave ratings, it seems he’s taken note and tried to upgrade his setup to one with a view.

He’s already diagnosed the problem with this though, as he captioned his photo “when you even manage to get wet on the ergo”. A balcony is a great place for the best zwift setups, but he’s made a schoolboy error of not checking the forecast – something you think a cyclist would remember to do.

The Irishman’s done well with his branding though, pairing an Elite Direto X trainer with the same brand’s floor mat. His choice of cushions is cute, but we can’t recommend mixing electricity and rain – sorry Nico.

A pretty brand-heavy setup for Owain Doull and he’s done well to show off his sponsors via this recent Instagram post. Ahead of his 125km Zwift innings, the Welshman had little more than a solitary SIS Gel on hand for his cycling nutrition.

Passing the time with a bit of Netflix isn’t a bad idea, although we can’t work out what it is he’s chosen to watch. Also, we’re not completely sure why he’s recording via his Garmin as well as Zwift.

As per our recent Wahoo Kickr Headwind review, we can’t argue with Doull’s choice of fan. The only thing we’d add is a towel.