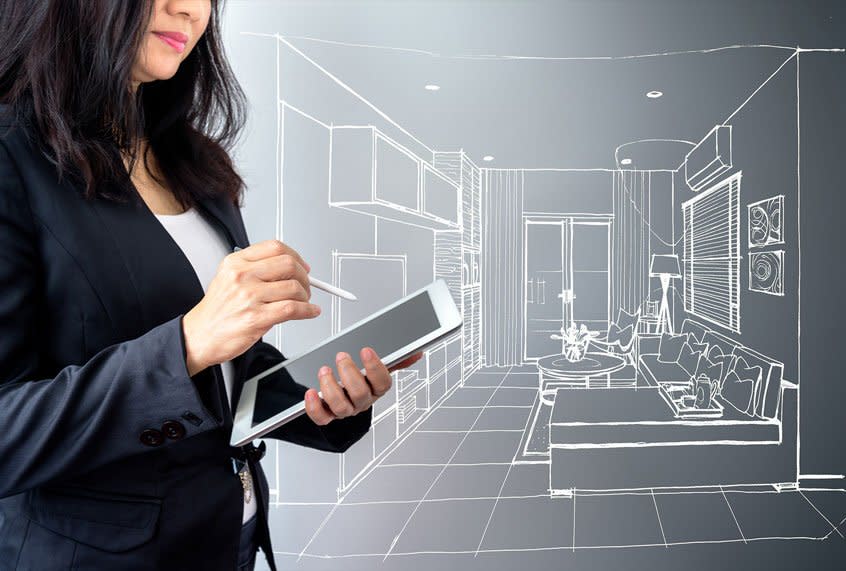 “Your Home Made Perfect,” a BBC Two renovation show, debuted in 2019, but its new second season has found particular relevance in the pandemic era.

Hosted by Angela Scanlon, the basic pitch of the program is that it allows two architects to use virtual reality to present homeowners with a fully formed, interactive version of their designs that allows them to “walk” through their potential new home without anyone ever having to pick up a hammer. Homeowners then pick the design that most appealed to them virtually, which inspires a real-life home renovation.

“They essentially step into their home as it was, pop goggles on, and they are standing in their kitchen,” Scanlon said in an interview with Build. “And then our architect begins to take them through the plan for the new home, and the walls come down.”

The concept was deeply appealing to me as I, like the rest of the country, have spent the vast majority of my time locked in my home since March; and when you spend that much time in your living space, it becomes clear what works — and what doesn’t.

That’s when it’s revealed that the tiny pantry that presented no problems when you were able to hit the grocery store more often fills up really quickly when you’re stocking up for weeks at a time, or that the home office that is perfectly quiet when you’re the only one occasionally working from home is actually an echo chamber for barking dogs and your spouse’s conference calls in the next room.

However, we’re also living through a time period where having a stranger come into your home for any reason — like an interior design consult, for instance — feels inherently risky, so the idea of being able to pop on that pair of goggles or look at a computer screen in order to visualize your new space seems like a smart solution.

But that concept isn’t just a reality on programs like “Your Home Made Perfect.” According to Matt Langan, the founder and CEO of stuccco, the concept of virtual interior design has gained new momentum during the pandemic.

“We think that by designing homes, using the latest technology, married with the best talent is the best solution,” Langan said. “So both of these offers attempt to accomplish the same mission, which is being able to design spaces as fast and as beautifully as possible.”

Virtual staging is primarily used by real estate agents who take photos of empty rooms in a home they have listed. Those are sent to a stuccco designer who, within 24 hours, will present the agent with a rendering of what the space would look like with furniture or specific amenities. For example, they could show a spare bedroom staged as both an office or a nursery. These photos average around $29 per rendering.

“And then the other component of our business is the online interior design side of the business,” he said. “That’s where we are matching up homeowners with one of our designers to collaborate, one-on-one, with any space in our home. The goal there is to have that space designed within 14 days of initiating the project, and our current price is $399 per room for the service.”

Stuccco’s services are entirely interior design-based, meaning that architectural changes like knocking down walls or building a new closet aren’t within the scope of the designer renderings. However, the designers are able to work with existing furniture and offer recommendations on online outlets that fit within the customers budget.

Currently, stuccco collaborates with brands like West Elm, Nordstrom, Etsy, Food 52, Arhaus, and Target. Customers are given a shopping list, which is filled with items that can be ordered online. This reflects a trend that developed pre-pandemic of more consumers purchasing furniture online than ever before.

According to a 2019 consumer report by Storis — a national retailer of software for furniture, bedding, and appliance industries —  it is projected that by 2021, 27% of total revenue will come from online sales (compared to just over 11% last year), while current data shows that over 90% of customers start their furniture purchasing process by browsing online, regardless of where they ultimately purchase.

Langan also says there has been a definite uptick in business over the last six months.

“We’re growing every single month, and part of that is because people are cost-conscious,” he said. “Part of that is also the appeal of contactless service; they don’t want people to invade their space.”

He is also seeing more requests from realtors asking his designers to virtually stage homes coming onto the market in a way that shows the potential for home offices and home gyms. Additionally, he’s also received an influx of queries from freelance designers asking if he has space open on his team for new virtual designers.

“Big, big uptick,” he said. “We are currently not actively taking on more designers, but I expect that may change as we go forward, so right now, we’re getting a lot of applications.”

Independent designers who typically work physically in homes or commercial spaces have also migrated online amid the pandemic. Natalie Officer, a designer based in Louisville who owns Natalie O Design, said she finished projects in Bushwick, New York, and in Northern California over the last several months by moving her services online, while G. Reyes, an architecture student who splits time between Nashville and Miami, said they have started taking on new projects that are organized completely online through emails and Skype sessions.

“I’ve started working with clients outside my immediate area,” said Reyes. “By doing more virtual work during all this, it makes me realize I can really expand my business.”

According to Matt Langan in Louisville, the way business is being conducted as a novel coronavirus workaround will likely shift the industry permanently.

“I think that there will always be demand for in-person services, and I’d like to believe that we’ll be able to taste normalcy to some degree in the not too distant future,” he said. “But I think that digital interior design is the best way of going about it for the vast majority of people who have to be cognizant of their time, money and also just want to leverage the best visual tech out there.”

He continued: “So I think what COVID has done is simply compressed the timeline of the inevitable, which is a shift toward digital.”

“Your Home Made Perfect” is currently streaming on Hulu.