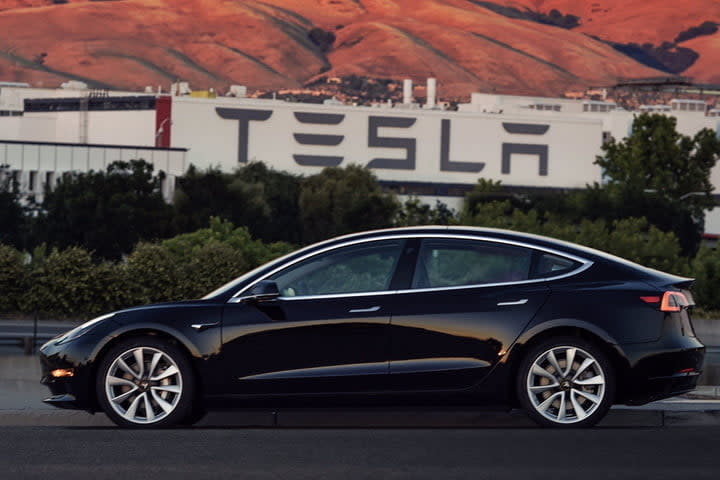 Tesla’s smallest and newest vehicles are also its most popular cars. Called Model 3 and Model Y, they’re brimming with tech features, and they’re a lot alike under the surface — they share about 75% of their parts. Although the Model 3 still outsells the Model Y, we expect the tables will turn in the coming months.

Here’s how these two compact electric cars stack up against each other on paper.

The Model 3 took Tesla’s design language in a new, more mature direction. It stands out with a grille-less front end, a Porsche 911-like low hood made possible because it doesn’t have a gasoline-burning engine, and swept-back LED headlights. Stylists made it as aerodynamic as possible to increase its driving range, which explains why it has an almost fastback-like roof line that flows into a trunk lid with an integrated spoiler. Sharp lights that stretch into the quarter panels emphasize the car’s width, while the use of chrome trim adds a touch of elegance to the overall design.

The Model Y follows the path blazed by the Model 3 from the tip of the front bumper to the base of the windshield. It wears the same low hood and elongated headlights as its sedan counterpart. Beyond that, designers looked at the Model X for inspiration. The Y’s long, sloping roof line echoes the X, as does the shape of its angular taillights. Above all, it’s instantly recognizable as a member of the Tesla family without being a carbon copy of another car. Both cars have a 0.23 drag coefficient, but the company has largely avoided the Russian doll approach to styling.

Tesla puts a big emphasis on technology when it designs an interior. The Model 3 embodies this approach with a 15.0-inch screen that looks like a super-sized iPad. Positioned on the dashboard, it displays the car’s infotainment system, and it bundles a long list of functions in order to replace nearly every stalk, button, and dial commonly found inside the car. Do you want to adjust the mirrors? There’s a menu in the infotainment system for that. Are you trying to adjust the climate control? Poke the screen a few times to set the temperature, and even move the air vents.

The Model Y uses the exact same 15.0-inch screen as the Model 3 to display the same infotainment system, and its interior shows a similarly high level of minimalism. However, it’s considerably more spacious thanks to its taller roof line. It can seat up to seven passengers when buyers tick the seven-seater box on the list of extra-cost options, and its total trunk space checks in at 66 cubic feet. In comparison, the Model 3 is strictly a five-seater, and its cargo capacity stands at approximately 15 cubic feet.

Both the Model 3 and the Model Y are optionally available with Autopilot. It’s a semi-autonomous technology that adds eight cameras, 12 ultrasonic sensors, and a forward radar that work together to allow the car to change lanes, read speed limit signs, navigate freeway off-ramps, brake if it detects a collision is imminent, and park itself. Drivers need to remain alert at all times; Autopilot doesn’t turn either vehicle into a fully self-driving car.

The most basic, rear-wheel drive version of the Model 3 offers up to 250 miles of range. It performs the benchmark zero-to-60mph sprint in 5.3 seconds, and it goes up to a top speed of 140mph if you give it enough tarmac. Don’t look for horsepower and torque figures; Tesla chooses not to release them to the public.

You can get all-wheel drive if you’ve got an extra $9,000 in your pocket. Range goes up to a more usable 322 miles, though the 3’s base price also goes up to true luxury car territory — and within a stone’s throw of a used Model S. The bigger battery pack reduces the 3’s zero-to-60mph time to 4.4 seconds. Finally, the Performance model’s maximum driving range remains pegged at 322 miles but it puts a bigger focus on — you guessed it — performance. Expect to hit 60mph in 3.2 seconds, which is seriously quick, and reach 162mph if you plan on visiting your local race track.

The Model Y is bigger, heavier, and less aerodynamic than the 3 so it’s a little bit slower. Only available with all-wheel drive, it offers 316 miles of range, a 4.8-second sprint from zero to 60mph, and a 135mph top speed. The Performance model sees its range drop to 291 miles, and its zero-to-60mph time go down to 3.5 seconds.

Keep in mind those figures can — and very likely will — change as Tesla ramps up production. The company has a proven track record of tweaking its range on a regular basis, sometimes via over-the-air software updates.

The Tesla Model 3 is available now all across the United States, though some variants — including the entry-level model — can take up to three weeks to ship. Pricing ranges from $37,990 for a rear-wheel drive, standard-range plus model to $54,990 for a top-spec Performance variant with all-wheel drive. Buyers are no longer eligible for federal tax incentives, though they might be able to claim local incentives depending on where they live.

Tesla has seemingly eliminated the entry-level Model Y priced under $40,000, so pricing starts at $49,990 for the cheapest version and tops out at $69,990 for the Performance model. Again, buyers won’t be able to claim federal tax incentives. Time will tell the effect this has on Model Y sales, but we expect it will become Tesla’s best-seller.

Both the Model 3 and the Model Y are exclusively sold online. The company had originally decided to close many of its brick-and-mortar locations but changed its mind. However, despite maintaining physical stores, Tesla has put a significant focus on digital sales strategies. In a way, this tactic has come easily given that many car enthusiasts will gladly purchase these models before even testing it out. Plus, buyers get a full refund guarantee within seven days or 1,000 miles, so there’s little risk.

Tesla enviably launched the Model 3 in a class of one. The competition is preparing to fire back, and it’s choosing to strike by crossover, so the Model Y will need to fend off a growing list of rivals from Volkswagen, Audi, Ford, Fisker, Nissan, and Volvo, among others. While it might not have tons of competition now, that segment’s only going to continue to grow as more manufacturers jump on the bandwagon.

Among its rivals, the Model 3’s toughest competition might just be from BMW. The i4 will arrive as a 3 Series-sized electric sedan with up to 530 horsepower on tap. Volvo-owned Polestar’s 2 (shown above) will also have the 3 in its crosshairs. However, crossovers tend to be a little more versatile (and popular) than sedans, which probably explains why the Model Y is facing tougher rivals than the Model 3.