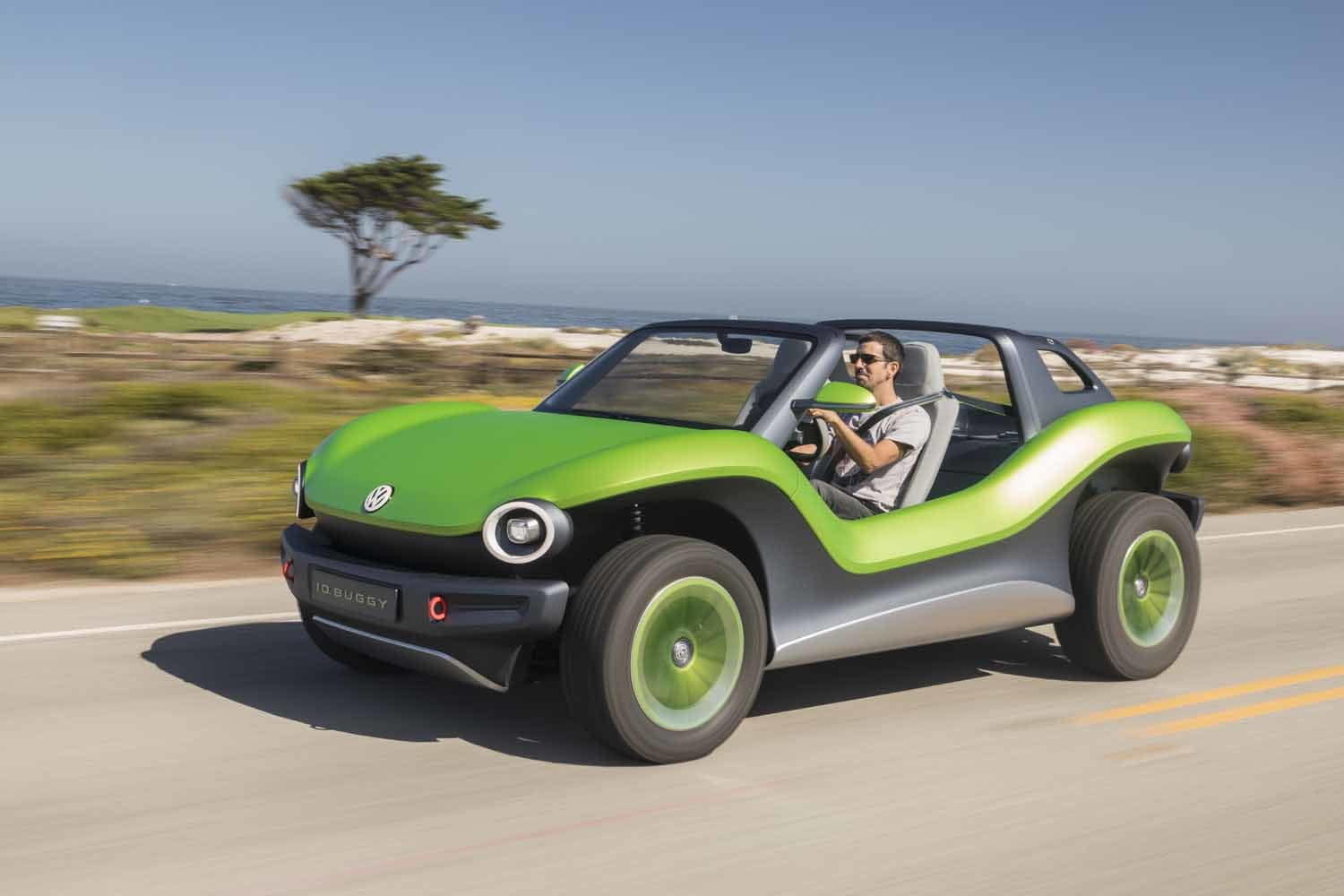 Cars are shaped by regulations, market trends, executive demands, and the segment they’re designed to compete in. Concept cars allow designers to throw these considerations out the window and build what they would truly like to see on the road. They’re often wild, head-turning creations that give us a glimpse into a stylist’s mind.

Automakers have recently become lazy in that regard, and these days concept cars are often little more than an upcoming production model decked out with cameras in lieu of door mirrors, big wheels, and shaved door handles. It’s unfortunate, but thankfully some brands still know which strings to pull to mesmerize us as we walk the floors of the world’s largest auto shows. Read on to learn more about some of the coolest concept cars of all time.

The 1938 Buick Y-Job is often credited as being the automotive industry’s first-ever concept car. That’s inaccurate; the honor goes to the Volvo Venus Bilo, which was built in 1933 to test the public’s reaction to a more aerodynamic look. Design elements like a full-width body, headlights integrated into the front fenders, and a curved grille helped it stand out from anything else on Swedish roads at the time. The Venus Bilo never reached production, but it influenced the PV36 Carioca launched in 1935.

You won’t find it in the company’s official museum. It somehow ended up in the hands of a scrapyard owner in Denmark who converted it into a pickup and used it as a work vehicle. Most historians agree it was destroyed before the end of the 1950s.

BMW’s hometown of Munich, Germany, hosted the 1972 Olympic Games. It was the ideal event to promote the company’s burgeoning lineup of sporty, driver-oriented coupes and sedans. The Turbo was built specifically to turn heads during the summer games.

While it looked like a German Ferrari, this sleek-looking BMW coupe shared quite a few components with the company’s 2002. It rode on a 2002 chassis modified to use a mid-mounted engine, and it received an evolution of the 2002’s four-cylinder. Performance was impressive enough to worry the Italians across the Alps, but BMW never approved the Turbo for production, and it remained a simple design study. The 1978 M1 put a different, straight-six  spin on the idea of a BMW supercar while channeling many of the Turbo’s design cues.

Odds are you’ve heard that the eighth-generation Chevrolet Corvette is mid-engined. It’s the first time Chevrolet has put a V8 behind the passengers in a production car, but the company experimented with this layout numerous times.

The 1973 Corvette 4-Rotor was an experimental coupe powered by a mid-mounted, double-rotary Wankel engine. Chevrolet engineers ran into the same issues with rotary technology as numerous other companies: the engine burned a jaw-dropping amount of fuel, and it wasn’t exactly reliable. The car was fitted with a V8 engine and renamed AeroVette in 1976, and it was nearly approved for production, but the idea of a mid-engined Corvette was dropped altogether before the end of the 1980s. It resurfaced in 1986.

Before Volvo embarked on a design renaissance, it was known for building safe, reliable, and solid cars with a design best described as unadventurous. It tried changing that in 1979 when it asked Italian design house Bertone to draw a shapely family car aimed at a larger target audience. The sketches morphed into the Tundra concept, a two-door sedan with a fastback-like rear end. Volvo decided not to move forward with the project, but the Tundra inspired the Citroën BX introduced in 1982. The nameplate laid dormant until Toyota secured it in 1999.

The family sedan of the year 2000 came to life through the Subaru F-624 Estremo concept. Under the outer space-esque design hid a continuously variable transmission (CVT), a four-wheel drive system with front/rear torque split, four-wheel steering, and a rear-view camera. The long, wide engine compartment was home to a twin-turbocharged flat-six engine. The F-624 Estremo didn’t progress beyond the concept stage, but a lot of its tech features trickled down to the Subaru lineup during the 1990s.

The Chrysler Atlantic took the public by surprise when it broke cover in 1995. At the time, Chrysler was churning out LH platform-based sedans with a cab-forward design, so no one saw the enthusiast-baiting Atlantic coming. It took the form of an elegant, retro-inspired coupe that paid tribute to the Bugatti Atlantique. It used a 360-horsepower V8 engine. It never made it past the concept stage, but it became Chrysler’s halo car for a few years during the 1990s.

When the Volkswagen Group purchased Bentley in 1998, executives from both companies made it clear they had big changes in store for the British brand. The Hunaudières concept illustrated one of the directions the company could take. It was a dramatic, low-slung coupe powered by an 8.0-liter 16-cylinder engine tuned to deliver 623 horsepower.

The Hunaudières’ never made the jump from the show floor to the showroom floor because it was deemed too extreme. Its exterior design loosely inspired the first-generation Continental GT, and the idea of a W16-powered supercar returned to the Volkswagen Group when Bugatti introduced the Veyron, one of the fastest cars in the world.

Lincoln previewed what could have been a spectacular return to form with the 2002 Continental Concept. With long, flat fenders, a tall belt line, and suicide rear doors, it captured the essence of the 1960s Continental and put a modern twist on it. From a design standpoint, it had nothing to envy Germany’s usual suspects in the luxury sedan segment. The Continental Concept never reached production, and RM Auctions sold it in 2002.

Lincoln introduced another Continental concept in March 2015. This time around, it spawned a production model that resurrected the nameplate after a long hiatus.

The Volkswagen GTI has used a front-wheel drive, front-engine layout since its inception. The GTI W12-650 concept deviated from that formula by adopting a 650-horsepower W12 engine mounted in the space normally occupied by the rear seats. It was lower, lighter, and much wider than the standard GTI it started life as. Enthusiasts believed it would spawn a production model — likely an expensive, limited-edition car — but it remained a one-off. It’s often displayed in Volkswagen’s Zeithaus museum.

The segment-defying Toyota Kikai broke cover at the 2015 Tokyo auto show. It exists at the intersection of hot rods, dune buggies, and wild concept cars, which is certainly a strange, unexpected place to be. And yet, it somehow works. Toyota presented the design study as a way to encourage motorists to embrace the mechanical complexity of a car, which explains why the Kikai puts a major emphasis on displaying drivetrain parts normally hidden in a car. Power comes from a gasoline-electric hybrid system, and the intricately-designed interior offers space for three passengers.

Honda’s Urban EV is one of the newest concepts on this list. Introduced at the 2017 edition of the Frankfurt Auto Show, it’s a compact, city-friendly electric car with a retro-inspired design. It spawned a production model named E in 2019, but Honda isn’t planning on selling it in the United States. That’s too bad; we like the idea of a sporty electric car with an adorable design and lots of useful technology inside. Of course, we’d like it just as much if it received a Honda motorcycle engine with an 11,000-rpm redline.

You would expect the combination of Lamborghini and the Massachusetts Institute of Technology (MIT) to produce a killer supercar, and the Lamborghini Terzo Millenio concept doesn’t disappoint. The aggressive, science fiction-esque design is just the tip of the iceberg here. The Terzo Millennio (a name that means “third millennium” in Italian) is powered by four electric motors that source electricity from supercapacitators, which store and dispense electricity faster than a conventional battery. The body is made out of a special type of carbon fiber that stores electricity and heals itself if it detects small cracks are forming.

Entirely electric, the Genesis Essentia concept is a coupe that shows this luxury newcomer is capable of building desirable cars. It looks like nothing else Genesis currently makes, and that’s intentional. The standout design is more than skin-deep, too. The South Korean firm built the Essentia out of carbon fiber to keep weight in check. Multiple electric motors draw electricity from a lithium-ion battery pack to send the coupe from zero to 60 mph in three seconds flat. It might reach production; Genesis strongly hinted it will soon enter the coupe segment.

Volkswagen resurrected the emblematic Meyers Manx beach buggy as an electric vehicle when it unveiled the ID Buggy concept at the 2019 Geneva Auto Show. Part retro and part futuristic, the buggy shows the fun side of the company’s on-going electrification offensive while showcasing the Lego-like flexibility of the electric technology it’s developing for production cars. Looking over the short, curvaceous front fenders to see the road ahead leaves no doubt that this concept was created with fun in mind. How do we know? We drove it in California.

Although Volkswagen likely won’t build the I.D. Buggy on its own, it could bring the design study to production with the help of a third-party partner. We’re still crossing our fingers, and hoping the production model (if it happens) doesn’t stray far from the concept.

Would you believe that’s a Hyundai? Named Prophecy, this shapely, low-slung fastback should have made its debut at the 2020 Geneva Auto Show, but it was unveiled online after the event was canceled. It’s electric and autonomous so it doesn’t have a steering wheel, though it’s fitted with a pair of joysticks that let the person in the driver’s seat control it if needed. Although this technology won’t make it to production, Hyundai strongly hinted other parts of this concept (including its silhouette and its electric drivetrain) will soon appear in showrooms.