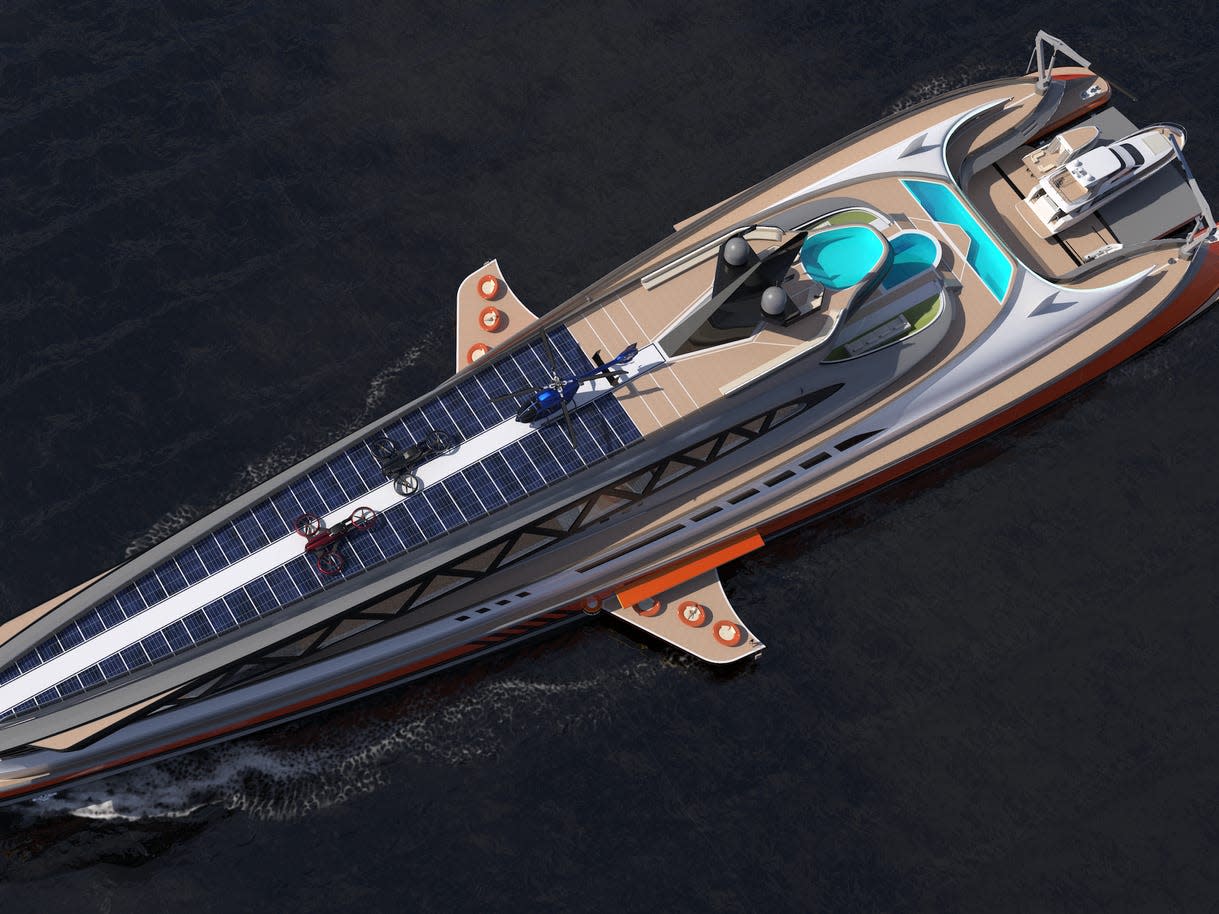 Rome-based Lazzarini Design Studio has unveiled its latest megayacht concept inspired by an animal and Roman architecture: the Prodigium.

The yacht could take about 28 months and almost $364.5 million to construct if the design was executed, designer Pierpaolo Lazzarini told Business Insider in an email interview. As a result, Lazzarini predicts the ship could retail for about $607.4 million.

Despite these high numbers, 2020 has proven to be a good year to unveil a yacht design given the resiliency of yachting during the coronavirus pandemic. While cruise ships have become a known source of coronavirus spread, superyacht marinas have stayed open, according to a report in March.

“Yachts are actually considered one of the most hygienic and safest places to be under any circumstance,” superyacht and luxury yacht firm IYC said in a news release in March. “The diligent efforts from crew members around the clock ensure that each yacht is thoroughly cleaned and sanitized prior to, and throughout every trip.”

Read more: Yachting insiders detail the rampant sexual harassment aboard million-dollar ships, where crew members are promised a glamorous lifestyle and can instead find themselves trapped at sea with no one to turn to

As a result, the wealthy have been resorting to superyacht charters as a way to isolate for up to several months at a time during the coronavirus pandemic.

“We are witnessing a double digit increase in terms of booking requests from clients who are looking to switch from a hotel stay to a yacht vacation,” co-founder and CEO of BoatAffair, a boat rental and “experiences” company, Adrian Walker told Paula Froelich for Travel and Leisure in March.

Similarly, boat sales, including yachts, saw an increase in sales early on in the pandemic, ultimately hitting a decade high in May with a 9% increase in sales compared to pre-COVID-19 numbers, according to a report from the National Marine Manufacturers Association (NMMA).

That same month saw a 51% increase in yacht sales in May compared to April, according to data from NMMA obtained by Barron’s Penta.

“Sooner or later, someone brave enough [to build the concept] will arrive,” Lazzarini said.

Keep scrolling to see the Prodigium:

The Prodigium is a 501-foot long ship with elements that mimic the shape of a shark.

However, the aquatic animal was not the only inspiration point the studio used to design the avant-garde megayacht.

“We imagine the shark as the emperor of the seas,” the design studio said in a statement. “Automatically with the term ’emperor and empire,’ we decided to base our design on the most famous empire, the Roman empire.”

As a result, components of both a shark and ancient Roman architecture can be seen throughout different parts of the yacht …

… from its shark fin-like terraces to the columns by the swimming pools.

The unique concept is the second of six nature-inspired yachts that the Rome-based design studio plans to unveil in the future.

The first design in the series – the $500 million concept Avanguardia inspired by Japanese anime and created to look like a swan – debuted in September.

The next concept is set to be unveiled January 1, 2021, designer Pierpaolo Lazzarini told Business Insider in an email interview.

Prodigium’s beam measures at almost 112-feet, making the ship what the design studio calls the “largest mega yacht ever conceived.”

However, this beam length doesn’t include the two additional terraces that extend out almost 22 feet on both sides of the ship …

… that were designed to resemble the fins of a shark.

In continuation with the shark theme, the living area on the upper deck was also designed to appear like the aquatic animal.

According to the Lazzarini Design Studio, the shark, combined with the Roman empire’s architecture influence, creates a “futuristic” appearance.

The Roman inspiration can be seen in the two columns towards the main entrance of one of the pools, according to its maker.

The columns support the upper floor and its swimming pool …

… although there are several other pools aboard the megayacht.

The concept has six different levels, with the top floor containing the main living space.

Meanwhile, the rear has a port that can carry 98-foot long yachts.

There are also two garages for extra water toys …

… room for three helicopters in the three hangars, and eight tenders.

Other amenities include gyms and extra living spaces.

And unlike other yachts with an open aired bow, Prodigium’s bow consists of an enclosed deck.

Solar panels line the top of the upper deck, according to images of the superyacht concept …

… but the ship is powered by three jet engines and two electric engines in the centerline.

This series of engines gives the yacht a cruising speed of 22 knots.

According to the studio, having a steel hull on the concept yacht gives the ship a lowered center of gravity, therefore improving its efficiency.

… and can accommodate 18 staff and 12 crew members.

According to Lazzarini, the design studio is constantly in contact with brokers, yacht agencies, and shipyards regarding design proposals and potential constructions.