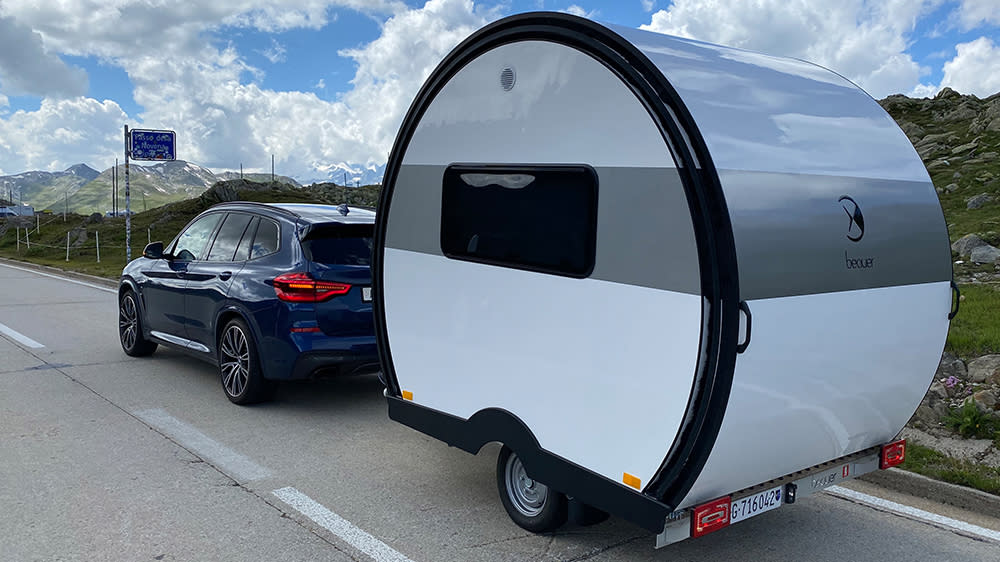 Travel trailers have evolved a lot over the decades but they’re still big and often bulky, especially if you want one with space. But Beauer doesn’t think things have to be this way.

The French company’s 3X model is an ultra-compact caravan that can expand to triple its size, according to Oddity Mall (via Motor1.com). That means that the trailer is small enough to pull behind a mid-size crossover, but more than roomy enough to comfortably sleep four adults when fully expanded.

First things first, the 3X is far from the best-looking caravan out there—an Airstream this is not. It looks a bit like like a can of tuna resting on a set of wheels. But what it lacks in aesthetics the trailer more than makes up for in convenience and utility. You’d be forgiven for thinking the 3X has room for perhaps two at best, but hit a button and 60 seconds later you have yourself a 129-square-foot trailer.

Once fully expanded, you’ll find that Beauer has outfitted the 3X with everything you’d expect from a fully loaded trailer. There’s a salon area that has a dual-window view and a table around which you can sit up to five. Next to this is a kitchen equipped with gas range, fridge and sink. It’s far from the most feature-laden caravan kitchen we’ve seen over the last couple years, but it appears to have plenty of storage and the interior design makes efficient use of the unique, tubular space.

When it comes time to turn in, there’s a bedroom with room for a large double-sized bed, even more storage and an attached bathroom, which can be upgraded with a shower. If you’re feeling more ambitious, you can even spruce up the space with a TV or a climate control system.

As you might expect, Beaurer designed the caravan so that all of its elements fit together neatly whether it is fully expanded or not. That means all you have to do is some minor rearranging before hitting the road.

The Beaurer 3X is certainly not the most luxurious trailer out there, but it offers a feature few trailers can match: efficiency on the road and extra space at the campground. If that appeals to you, the expandable trailer starts at €29,900 (or about $35,600). You can find more info on the company’s website.

Why Is Education Important